Seth Oakman a new scenario, the 3rd in his campaign called In Blackest Pits. Go check it out. 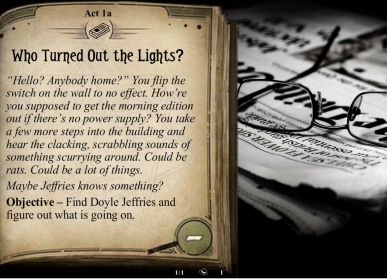 In Blackest Pits is a fan-created campaign for Arkham Horror: The Card Game for 1-4 players. This file contains the third scenario: “Stop The Presses!” This scenario can be played on its own or combined with future scenarios yet to be released from the In Blackest Pits cycle to form a larger campaign.

After the events at Arkham’s Annual Founder’s Day celebration, the investigators have decided that an article must run in the morning edition of the Arkham Advertiser to warn citizens of the imminent dangers invading the town. Sneaking in after hours, they find the Editor-In-Chief being terrorized in the dark by a mind-altering apparition.

Will you be able to remove the threat in time? Will your anonymous article make the morning edition?

Includes necessary encounter and role cards from Scenario 1, The Initiation.