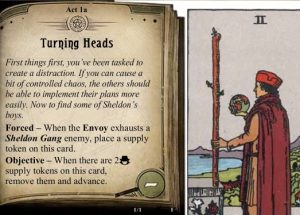 What did you think? Cast your vote below

Author/Creator : Seth Oakman all credits goes to him.

In Darkest Pits is a fan-crated campaign by Seth Oakman for Arkham Horror: The Card Game for 1-4 players. This file contains the first scenario: “The Initiation.” This scenario can be played on its own or combined with future scenarios yet to be released from the In Blackest Pits cycle to form a larger campaign.

The citizens of Arkham are once again acting strangely, and no doubt the newly formed Silver Twilight Lodge is at the heart of these strange occurrences. With the well-being of your neighbors in mind, you decide to infiltrate the lodge to find out what is really going. But first you’ll have to pass Carl Sanford’s initiation.  In “The Initiation” each investigator is assigned a role and will have their own Act deck to complete as they work to impress Mr. Sanford and gain his trust. Just how far are you willing to take this charade?

Carl Sanford gathers the initiates together for what he refers to as the Initiation, a first test on the path to becoming a true proponent of the lodge. You are warned countless times that the trials ahead will not be for the faint of heart. You may even begin to wonder if you are truly working for the common good, but you must always give your trust completely to the lodge. After all, this is not some fraternity initiation; this will be a violent and difficult undertaking.  You are taken into a room for a private briefing. Sanford tells you there is a gang of bootleggers that have taken over an abandoned farmstead that will be of very much use to the lodge. You must run them out, but there are just a few more tasks that are asked of you. You who show such promise. You who have been chosen for a very particular end.