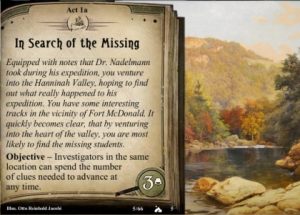 What did you think? Cast your vote below

“Against the Wendigo is my first custom stand alone scenario for Arkham Horror TCG. I translated it to from french to english with the help of 2 awesome proofreaders, Stephen W “St Cretin” and Matt A.”bakunin888″.
This scenario is a sequel to the Call Of Cthulhu RPG add-on “Alone Against the Wendigo”, a solo adventure written by Glenn Rahman, edited by Chaosium. Several months after the outcome of the original adventure, you explore the wild Hanninah Valley in Canada’s far Northwest, looking for the missing students of Dr Nadelmann’s expedition.
It is not necessary to know the original story to play this scenario. However, be forewarned that the North Hanninah valley is a wild and dangerous territory, from which many explorers have never returned…
You only need player cards from a core game box in order to play this 71 cards scenario (+1 cover card), no need for official encounters cards.
Please note that the scenario comes with a FFG-style campaign guide for special rules, setup and resolutions, you will need it in order to play.
You can play it as a stand alone scenario, or as an additional adventure in campaign mode for 2xp per investigator. “
Author/Creator : Vinn Quest all credits goes to him.

36
Tell us what you think

First off, I am blown away with the art, flavor, and detail that went into this! I just got my copy printed out and eager to try it. Thank you so much for adding to the Arkham Community Vinn Quest!

Thank for the feedback Nathan, I hope you’ll enjoy the adventure !

After playing it, I am officially a huge fan. Great mechanics, great pacing, tons of fun. Shot to the top tier of my all time favorite scenarios.

Would it be possible to get the source cards so I can translate to Polish?

Hi Matt ! Sure, mail me at vinn.quest.15@gmail.com and i’ll give you a link to the source files.

Can you have it in Polish version ?

Unbelievable—-What a experience we had. Very well done, the scenario locations fits perfectly to the storytelling. We will play it again. We could have done more for investigating the case but the time of play was a bit longer than we expected, 4 hours and we decided to leave the scenario, otherwise we finished it very well but we left some experience points. Many Thanks to Vinn Quest for making this possible.

Thanks for your feed back Alberto, it’s very cool !

This is hands down the best players created scenario I have tried so far 🙂
If you only ever try one …. make sure its this one.

Excellent scenario! Although I have to curse you for some tests and the specs of some enemies 😀 lol… I ran away to finish the scenario (1 investigator), but definitively want to replay to try to explore all the aspects. Congratulations! And please, keep making scenarii as good as this one.

Thanks for your feed back LioDePot ! I’ll do by best for what is coming next 😉

is there suppose to be a 2 b agenda or not i was just wondering.

Hi ruby ! To answer your question without spoiling anything: some times there is no b side on agenda or act card in a scenario (scenario #2 of the core box for instance). If there is something else you resolve the revelation effect and just continue with the next agenda or act card. And every thing you have in my scenario is supposed to be here… Well at least what you have on b sides 😉
I hope this answer you question, else feel free to contact me, i left my mail somewhere in a previous reply. Have fun !

Played last night with four x zero experience investigators as a standalone scenario. Took 4 hours. Great use of theme and the game engine. Neat to see the card layout applied to wide open spaces, and the feel of the Canadian Rockies was good. Great story – both the setup story for the original expedition, and the story that unfolded as we played – the guides and their families, the RCMP and their response, and the terrain and weather. The mist rolling through the valley, and the fickle nature of the river were well-done. Beautiful card design – evocative art… Read more »

Hello Chris, and thanks for your cool review ! I did spend a lot of time and consideration on illustrations’ choices, i’m happy that the final result was worth it 🙂 Spoiler-free answers for your questions : 1 . Guide-traited ally don’t have an ally symbol, and so don’t take an ally slot. It’s an implicit rule i’ve noticed from official scenarios: an ally you encounter in a scenario don’t have an ally symbol, unless this ally is supposed to be added in your deck at the end of the scenario, being playable in the next scenarios of a campaign,… Read more »

It could be possible to get the psd file to translate it to spanish?

Hi Oriol, I made the scenario with Strange Eons, so i don’t have .psd files, but .eon files.
Send me a mail at vinn.quest.15@gmail.com if you’re still interested, so i could send you the link for the files.

Is there any allowance in Polish?

Hi ! I made this scenario with Strange Eons, so i don’t have .psd files, but .eon files. If you wish to translate it in polish not problem, send me a mail at vinn.quest.15@gmail.com i will send you the link for the files.

Mesmerising work. Well done! Absolutely loved every detail of it. A solid, thought-through scenario, with amazing theme and set up.

Thanks for making this frankly amazing scenario for us!! Really enjoyed my playthrough on this one.

Thanks gustave154 i’m glad you liked it 🙂

Since there is so much text on some of the cards, created a pdf to print larger for you amusement
https://drive.google.com/open?id=17GBibtylXHg-Kqo0Ujsr2AfZvZuDgLQ0

This was an incredible scenario, super fun to play. I enjoyed trying to navigate the river while running from the wendigo. Along those same lines, working my way through the different areas was a blast.
Thanks for a well designed scenario.

Hi everyone! In the last few months I’ve been working on the italian version of this scenario (Vinn was incredibly nice and helpful) and it will be available soon! Stay tuned 😀

I finally got round to making the scenario available on PrinterStudio! Here it is:
https://www.printerstudio.com/sell/designs/against-the-wendigo-ahlcg.html
Should be $21 plus postage costs.

Having now, finally (after a year break from board games) printed and played through it, I can say that the game design and the print quality are both excellent! Highly recommended epic journey through the Canadian north. I might be biased because I proofread, but it does seem really good.

Hope that you printed the ones with the latest corrections that Vinn posted at the end of November! 🙂

I’m reasonably sure I printed the latest version, how could I check?

The change log is in this page, just above the commentary section. For instance :
#4a Agenda 3a : Forced effet should be “When at least 1 damage is placed on an investigator or an Ally asset: Add 1 doom … “

Do you have this story in Spanish?

Hi Rober ! I’m in touch with a spanish translator, the scenario will hopefully be available in spanish soon…

I played this scenario this morning and it’s very cool. It’s ambitious and looks great. My one criticism would be to make the movement and location connections more clear, as this felt massively confusing until we stumbled and bumbled our way to the end of the scenario. If I understand the rules correctly, I’d say to work in the following clarifications. 1. The river seems like you can only move along it via the actions on the cards. It doesn’t function like other location cards. The movement actions on the River cards are the only way to move from one… Read more »